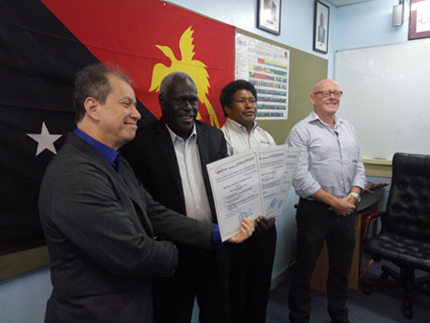 Bermuda – January 17th, 2017 – ABS announced it has been granted the Network, Applications and Gateway Operator licenses to serve Papua New Guinea (PNG) from the National Information and Communications Technology Authority (NICTA).  The licenses awarded will allow ABS to operate as a telecom operator as well as a satellite service provider.

ABS is the first international satellite operator to incorporate a company in PNG, known as ABS Global Satellite Limited (AGSL) to provide information communication technology (ICT) services, registered with the Investment Promotions Authority. ABS has been in partnership with NICTA since 2008, which has resulted in a number of orbital slot positions around the world brought into use by ABS by deploying several satellites currently at such orbital locations.   AGSL has met all due diligence requirements and its license applications were approved by the NICTA Board on December 16, 2016.  The three Individual Operator Licenses granted by NICTA are technology neutral and now give AGSL the rights to provide ICT services in accordance with NICT (Operator Licensing) Regulation 2010.

ABS initially plans to set up a major teleport in Port Moresby to provide connectivity from its Asian gateway though the ABS-6 satellite which will bring cost effective internet connectivity and VSAT services into the country.  From the gateway hub, we will also offer more affordable internet access to remotes in underserved rural regions and outlying islands transforming the market with accessible and reliable services.

ABS will be primarily engaged in satellite based or satellite support telecom infrastructure, but where necessary will deploy fiber or microwave to complement the connectivity requirements.  Cellular mobile service is also allowed under the license and may be contemplated in the future.

“The approval of the telecommunication licenses is an important milestone and development for ABS in the South Pacific region.  The challenge in the Pacific has been to deliver high quality resilient and cost effective voice and data solutions. Improvement in connectivity paves an opportunity for sustainable growth in PNG and is central to bridging the gap with its rural areas and neighboring countries,” said Tom Choi, CEO of ABS.    “PNG is the land of the unexpected, and we at ABS are happy to bring competition into the market place to enable the provision of more affordable telecom services to the ultimate benefit of the PNG populace.”

Mr. Charles Punaha, CEO of NICTA, commented, “PNG internet penetration remains below 10%, which is very low on a global scale.  This is mainly because the cost of rolling out a network in PNG is very expensive, compounded by the topographical conditions of the country, with isolated communities.  We are pleased at the entry of the first satellite operator into the country to bring competition for the provision of ICT services which will result in more economical pricing. This will in turn trigger a higher demand for services supporting the development of the country.”

Headquartered in Bermuda, ABS has offices in the United States, UAE, South Africa and Asia. ABS is majority owned by funds managed by the European Private Equity firm Permira.  The Permira funds acquired ABS in 2010.

NICTA was established on the 29th of October, 2010, as the sole converged regulator and licensing authority of the ICT industry in PNG. This followed the adoption by the PNG Parliament in November 2009 of the National Information and Communications Technology Act 2009 (the NICT Act).

The aim of the Act is to ensure the ICT industry contributes meaningfully to the long-term economic and social development of PNG.

NICTA works closely with all stakeholders while ensuring industry compliance with license conditions, codes and standards.

NICTA also monitors the effects of regulations to ensure they are responsive to the wider community’s needs.