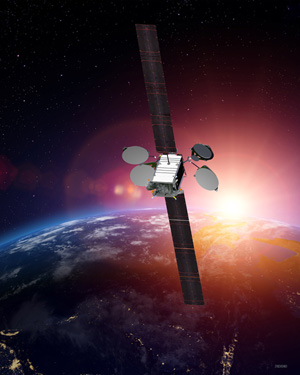 Bermuda, 12 June, 2015 – ABS announced today that it has selected Boeing Satellite International, Inc (Boeing) to manufacture the ABS-8 satellite. ABS-8 will replace ABS-7 at 116.1 degree East orbital location, and will also deliver significant expansion capacity for Asia, Russia and the Middle East. The satellite is expected to launch in 2017.

ABS-8 will be the third innovative all-electric propulsion 702SP satellite ordered from Boeing that minimizes the spacecraft’s mass and maximizes available payload. The spacecraft will have over 9 kW (kilowatts) of payload power and it will be equipped with 50 active transponders. ABS-8 will incorporate traditional wide beam coverage beams in C, Ku and Ka bands, a high-power ultra-throughput multi-spot Ku-band and a steerable high-power Ka-band beam payload configuration to deliver both performance and flexibility. This satellite will expand broadcast, data and enterprise services to multiple markets: the Middle East, Russia, Southeast Asia, South Asia
and the South Pacific region.

“The procurement of ABS-8 shows our confidence and trust with Boeing on the allelectric propulsion 702SP platform technology. The prescribed satellite payload of C,Ku and Ka beams with wide beams and high throughput capacity would serve the government, mobility, telecoms, DTH and Rural broadband sectors,” said Tom Choi, CEO of ABS. “ABS is committed to continually innovate and improve the competitiveness of the FSS industry for the betterment of our customers”.

“The decision by ABS to order a third Boeing 702SP satellite is a testament to our customer’s confidence in the capabilities of this satellite,” said Mark Spiwak,president of Boeing Satellite Systems International, Inc. “With the innovative allelectric propulsion design, Boeing is able to maximize payload while decreasing overall satellite mass and cost.”

ABS-8 will follow the launch of ABS-2A which is scheduled to launch in the fourth quarter of this year. This is part of ABS’ expansion plans to add more satellites and the associated capable and flexible capacity to its growing fleet.

About ABS:
ABS is one of the fastest growing global satellite operators in the world. ABS offers a complete range of tailored solutions including broadcasting, data and telecommunication services to broadcasters, service providers, enterprises and government organizations.
ABS operates a fleet of satellites; ABS-2, ABS-3, ABS-4/Mobisat-1, ABS-6, ABS-7 and the recently launched ABS-3A. The satellite fleet covers 80% of the world’s population across the Americas, Africa, Asia Pacific, Europe, the Middle East, CIS and Russia. ABS-2A, the second of the pair of 702SP satellites procured from Boeing, is planned to launch in late 2015. ABS plans to add more satellites in the next 2-3 years to its growing fleet.