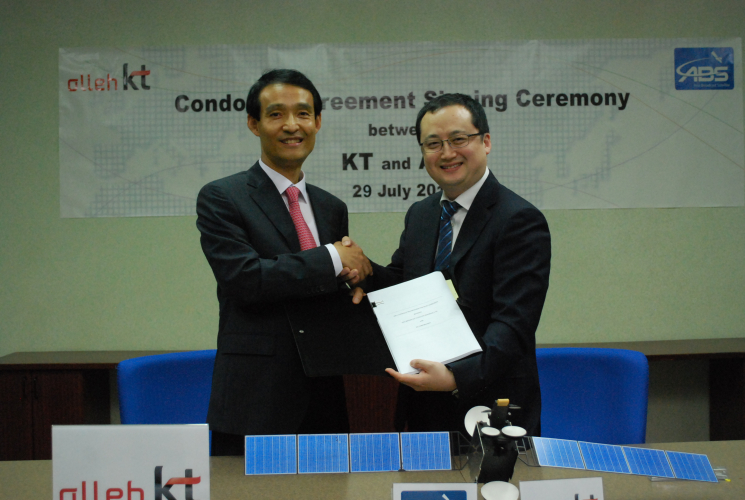 KT Corporation (KT) and Asia Broadcast Satellite (ABS) announced that they have signed a multi-million dollar deal for multiple C and Ku-band transponders on ABS’ satellites, including the new ABS-2 satellite scheduled to be operational by Q1 2013. This will mark the third successful transaction between the two organizations in just over 12 months with the earlier agreements for the sale and purchase of two Koreasat satellites.

The ABS-2 satellite will be one of the most powerful commercial satellite to be launched in the Asia Pacific region with nearly 12 kilowatts of payload power and up to a total of 74 active C-band, Ku-band and Ka-band transponders across 8 different beams and will be launched in early 2013. ABS-2 is specifically designed for a wide range of services including DTH, Cable TV distribution, VSAT services, Data networks and Telecommunications services. ABS-2 will provide expansion capacity to existing ABS-1 customers, and will also act as in-orbit spare and provide backup for the ABS-1 transponders.

Present at the signing ceremony were Mr. Sung Man Kim, Senior Executive VP of KT Corporation and Mr. Tom Choi, Chief Executive Officer of ABS along with representatives from both companies.

Mr. Sung Man Kim, Senior Executive VP of KT Corporation said “This Condosat Agreement will strengthen KT’s satellite business with a view of better support on its customers who are in need of global connectivity. Thanks to this additional capability, KT could serve around 66 countries with the umbrella of KT’s combined satellite fleets.”

Mr. Tom Choi, CEO of Asia Broadcast Satellite said “Just over a year ago in early July 2009, we concluded our first successful transaction with the KT Satellite Group to acquire Koreasat-2. Within the 12 short months that we’ve had the pleasure of working with the KT team, we have been able to successfully complete our third transaction together, which truly signifies our close partnership with KT. We continue to be committed to supporting and working closely with KT to successfully develop future opportunities together.”

KT is Korea’s No. 1 telecommunications service provider, and is creating a world with ubiquitous, cutting-edge technology that goes beyond world-class broadband technology. KT, Korea’s top integrated wired/wireless communications service provider, has been Korea’s leader in the development of the information and communications business for the last 25 years. In that same time, it has helped Korea turn into an IT powerhouse with the world’s leading technology in the operation of broadband service. KT is operating KOREASAT satellite fleet since 1995 and has been providing various satellite services including satellite broadcasting services for SkyLife’s over 2.4 million subscribers.

For more information, please visit the Company’s website at www.kt.com.

Asia Broadcast Satellite (ABS) is one of the fastest growing premium satellite operators in the world. ABS serves a global customer base with representatives in Asia, the Middle East, Europe and North America. ABS offers a complete range of End-to-End solutions including Direct to Home (DTH) and Cable TV distribution (CATV), Cellular Backhaul, VSAT and Internet Backbone services with diverse IP transit through its European and Asian internet gateways. ABS currently hosts over 175 TV channels making it as one of the fastest growing and top satellite distribution platforms and broadcaster of TV channels in the Asia Pacific.

ABS is rapidly expanding its satellite fleet and business worldwide through the recent acquisitions of ABS- 7, ABS-1A (formerly Koreasat-2) and ABS-5/Agila 2 (acquired from Mabuhay Satellite Corporation). ABS has also completed a strategic cooperation with Eutelsat for the ABS-1B/W75 satellite at 75°E. ABS is planning the launch of a new state-of-the-art high powered satellite, ABS-2, that is scheduled to become operational in 2013. ABS-2 will be co-located with ABS-1 at the 75° East Longitude, ABS’ prime orbital location, which will be the most powerful orbital location in the Asia Pacific / Indian Ocean region with over 20 kilowatts of power and expansive coverage with 120 active C, Ku and Ka-band transponders.

ABS is committed to maintaining its aggressive growth through the announcement of more strategic partnerships, acquisitions, and further additions to its satellite fleet of ABS-1, ABS-1A, ABS-1B, ABS-2, ABS-5 and ABS-7.