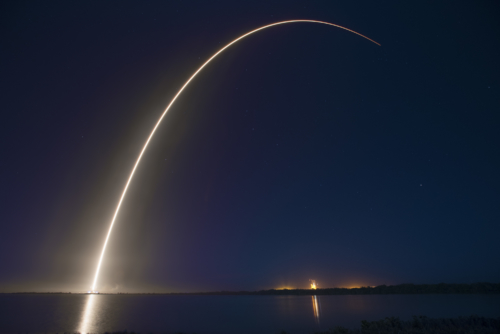 ABS celebrates the launch of the ground-breaking ABS-3A satellite to connect the Americas, Europe, Africa and the Middle East.

1 March, 2015 – ABS announced that ABS-3A was successfully launched aboard a SpaceX Falcon 9 rocket from Cape Canaveral, Florida at 10:50 p.m. EST. The satellite lifted off as a conjoined stack with EUTELSAT 115 West B.

ABS-3A is the revolutionary 702SP satellite, with an innovative design that will have a significant impact on the industry. ABS-3A is lighter and smaller than a conventional satellite due to the use of the all- electric propulsion system, making it more economical to launch. A conventional chemical satellite uses 50% of its weight during the ascent into orbit. Built by Boeing Space Systems International, ABS-3A is equipped with 48 x 72 MHz C & Ku-band transponders and will offer expanded communications and broadcast capacity connecting the Americas, Europe, the Middle East and Africa at 3°W.

“We have always called upon the industry to be more cost effective to better compete with other alternatives. Now we are showing our lead to the industry. We have not only ordered two all-electric propulsion satellites, but also collaborated with Eutelsat to obtain a volume discount as our two satellites are part of a four satellite, two launch multi-party agreement we have negotiated with Boeing and SpaceX respectively, ” said Tom Choi, CEO of ABS. “We would like to thank both SpaceX and Boeing for their collaboration for delivering today’s successful launch. With ABS-3A innovative design and capability, we will be able to provide our customers with the most attractive rates and flexible service offerings in the market.”

“ABS chose to place its trust in Boeing by being one of the first customers to order the 702SP all-electric propulsion satellite,” said Mark Spiwak, president of Boeing Satellite Systems International, Inc. “Boeing is proud to provide this innovative, industry leading capability to ABS in support of their growing business needs.”

ABS-3A is the first of two satellites planned by ABS for launch in 2015. ABS-2A is due to be launched in the fourth quarter of 2015 and will represent the same technological innovation at the leading edge of the industry.

ABS has also procured another Boeing 702SP satellite, ABS-2A) planned for late 2015 with the options to add more satellites over the next 2-3 years to its growing satellite fleet.